This article describes automating backup process in v. ≥ 5.0.0 Jaglion. For previous documentation versions, see documentation archive.
With SEP sesam, you can back up all kinds of data in different virtual environments. But as the number of virtual servers increases - new virtual machines (VMs) are created and deleted every day in the dynamic environment - manual configuration of backup tasks becomes quite tedious and time-consuming.

To simplify the backup of multiple VMs, you can automate the process by automatically generating tasks for VMs associated to the same host; additionally, you can also automatically create clients for VMs to which the generated tasks and ACLs can be assigned. It is recommended to use these features whenever a new hypervisor is added and there are many new VMs that need to be backed up.

SEP sesam provides specific CLI commands that can be used in the GUI as a pre-backup script that is executed before the backup job for the task group and automatically adds new tasks for VMs. As SEP sesam uses the default auto-generated names for backup tasks, you can customize the task name creation by using the task name template, as described in Task Name Template – Backup.

Tasks and virtual clients can be created under a specific location, and depending on your security requirements, access can be based on user types. For example, tasks with the auto_generated flag are read-only for a user with the backup role. For more details on SEP sesam user types, see User Roles and Permissions.

You could use the following scenario to create the tasks, generate clients in different locations, customize the task naming convention to your needs, allow specific user types to start the tasks but exclude them from modifying already created tasks.

The SEP sesam command line tool taskgen is used to create tasks according to the specified task type and can also be used to generate VM clients.

The following parameters are required for task generation:

If the client is a VM server, the tasks are created for all VMs of the VM server.

To specify the source for multiple tasks and filter the list of VMs for the task to be created, use the –f parameter, which can be defined by the following two variants:

If the output of any of the described commands is passed as input for task creation, a backup task is created for each node of the output. This applies to VMs of a virtualization server, to path nodes of a normal client, and also to subnodes of a database server.

The following syntax is used for generating VM tasks:

The following options can be set:

The possible values of the option parameter are:

To automatically generate virtual clients for VMs with SEP sesam, the following parameters must be specified:

The following attributes are automatically set for the generated client:

Tasks are assigned to the client. In the Topology view they are displayed twice: once under generated client and once under VM server.

You can use the Rythm template to automatically generate task, location or VM client names. For details on how to use task name templates with the Rythm syntax, see Task Name Template – Backup.

The following table lists useful placeholders that can be used when generating tasks names.

You can automate the backup of new VMs in the SEP sesam GUI by adding tasks to a task group and including the task creation command in the pre-backup script of a task group. If configured, the script is executed before the backup job and automatically adds new tasks for VMs. For more information, see Using Pre and Post Scripts.

You can add all tasks for a backup target or other tasks with similar characteristics to a task group and trigger all tasks with a single event. For a step-by-step procedure, see Adding a Task to the Task Group. 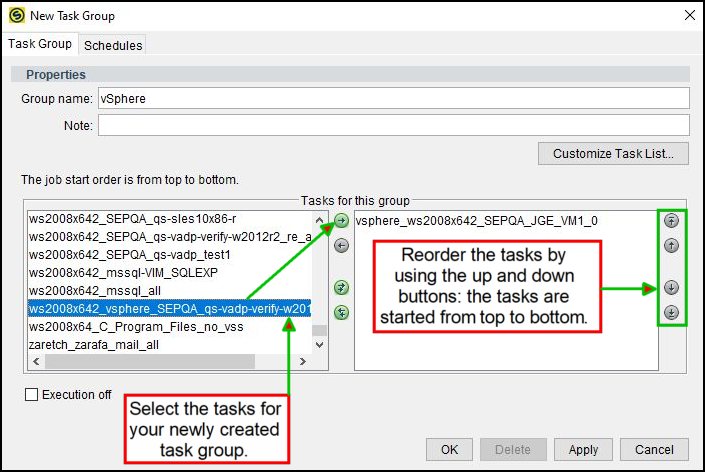 After creating a task group, include the task generation command in the pre-backup script of a task group in one of the following ways: 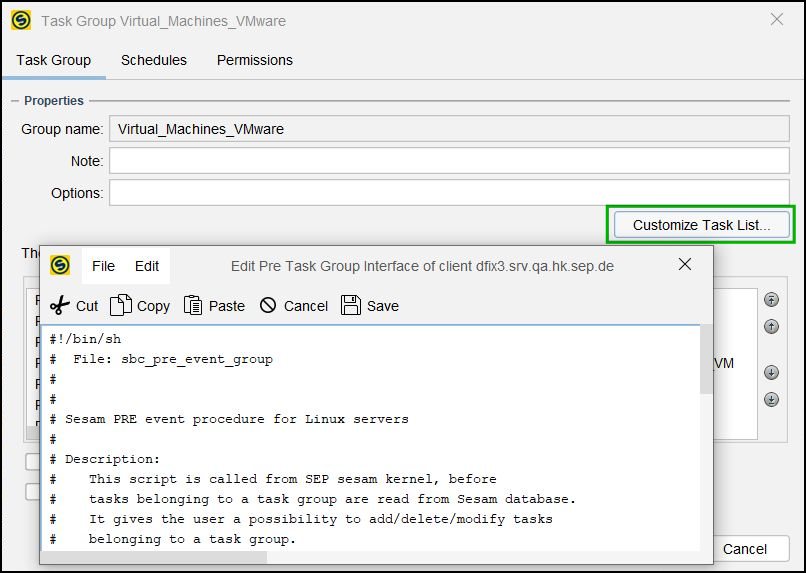 When a backup job is started for the group, the tasks on the drives will run simultaneously if possible. Other tasks are dynamically assigned to backup devices by SEP sesam. You can view the status of the entire task group by selecting Last backup state in the Main selection window. The backup status overview provides detailed information on the last run of backup jobs, including the task name, start and stop time of the last backup, backup level, data size, throughput, assigned media pool, etc.

The following is an example of auto-generation of tasks and clients.

To auto-generate tasks and clients for vSphere VMs that do not have any other task associated with them in the same task group and simultaneously delete all tasks from the task group for VMs that no longer exist, do the following:

To auto-generate tasks for Hyper-V VMs that do not have any other task associated with them in the same task group (test_vm_taskgen_hyperv) and simultaneously delete all tasks from the task group for VMs that no longer exist, do the following:

To auto-generate tasks for Citrix VMs that do not have any other task associated with them in the same task group (test_vm_taskgen_citrix), do the following:

To auto-generate tasks for Proxmox VE VMs that do not have any other task associated with them in the same task group (test_vm_taskgen_proxmox), do the following:

To auto-generate tasks for RHV VMs that do not have any other task associated with them in the same task group (test_vm_taskgen_RHV), do the following:

To auto-generate tasks for OpenNebula VMs that do not have any other task associated with them in the same task group (test_vm_taskgen_opennebula), do the following:

To auto-generate tasks for Nutanix VMs that do not have any other task associated with them in the same task group (test_vm_taskgen_nutanix), do the following:

To auto-generate tasks for MySQL databases in the same task group (test_mysql_gen), do the following: