SEP sesam enables you to protect and manage your storage file servers by providing support for Network Data Management Protocol (NDMP). NDMP is a common protocol for backing up and restoring data on storage devices that do not support installation of a backup agent. It ensures interoperability between NAS file servers and SEP sesam, and is used as an interface that enables SEP sesam to backup various NAS appliances and copy this data to a SEP sesam Server or Remote Device Server. SEP sesam supports version 4 of the NDMP protocol. For a list of supported NAS appliances, see the support matrix.

SEP sesam provides NDMP remote configuration, where the data from the NDMP host is backed up and transferred over a TCP/IP connection to SEP sesam Server's connected storage, e.g., disk storage or a virtual tape library that is used for data protection and archiving.

SEP sesam provides the SEP sesam Data Management Application (SDMA) as a session master that is responsible for initiating and managing backup and restore operations of NDMP compliant systems. Each such operation is called an NDMP session. The SDMA cannot directly access source data; it serves as a remote NDMP client. Access to the source data and the destination of the backed up data is provided by NDMP data services. NDMP data service on NDMP host provides an interface to the source – the primary data storage, e.g., filers that store "live" data on an active file system. During backup, it converts the content of the file system into a data stream and sends it via the NDMP data connection to the SEP sesam Server or RDS. Note that the backup data format depends on the NDMP appliance and user-defined configuration of this format. During restore, it reads the data stream and recreates the file system.
Another NDMP data service is located on the SEP sesam NDMP host (SNDMP) and provides the interface to the SEP sesam storage. During backup, it writes a data stream to the SEP sesam Server or RDS. During restore, it reads content from data storage and converts it into a data stream in an NDMP data connection. 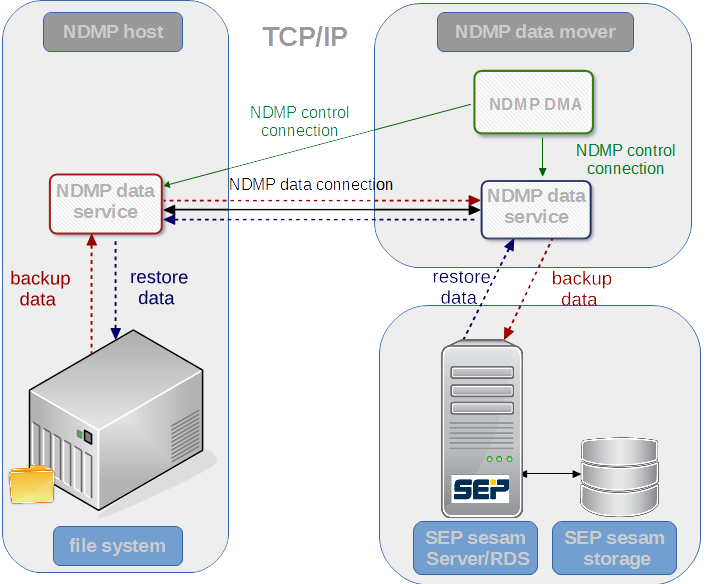 As of SEP sesam 4.4.3 Tigon V2 , SEP sesam supports the NDMP CAB (Cluster Aware backup) extension to perform backup and restore operations for cluster nodes running ONTAP. The NDMP v4 protocol (supported as of ONTAP 8.2 and later) is modified with a NetApp Cluster Aware Backup (CAB) extension which allows mutual communication between a backup software (SDMA) and the NDMP server.

You can back up and restore all volumes hosted across different nodes in an SVM of a cluster. The entire cluster is available for the backup, which means that all the volumes are exposed irrespective of where they are hosted. The SDMA notifies the NDMP server about the volume to be backed up (or restored) prior to establishing the data connection. CAB extension enables the NDMP server to identify the node on which the volume is hosted and to appropriately establish a data connection on the node that hosts a volume.

The CAB advantage is that it enables SEP sesam to perform a local backup or restore by connecting to the cluster management interface IP address and accessing all the volumes belonging to all storage virtual machines of the cluster over this single interface.

The NDMP protocol does not specify a backup data format, it depends on the used NDMP applliance. For a list of supported NAS appliances, see the support matrix. SDMA is implemented on all supported Linux and Windows systems.

The following backup formats are supported depending on appliance:

For example, with NetApp you can choose between the normal NDMP dump and smtape backup.

SEP NDMP module is already included in the installation package. SEP sesam NDMP (sbc_ndmp) must exist on the system which serves as your data mover. For details, see What is a SEP sesam Data Mover.

NDMP configuration involves several steps, including authentication with the NDMP server. Typically, you should use the root password or non-root user with a system-generated, NDMP-specific password. Refer to your NAS appliance documentation for configuration instructions!

If you want to protect your NDMP-ready system, you must configure your NDMP host as a SEP sesam client. 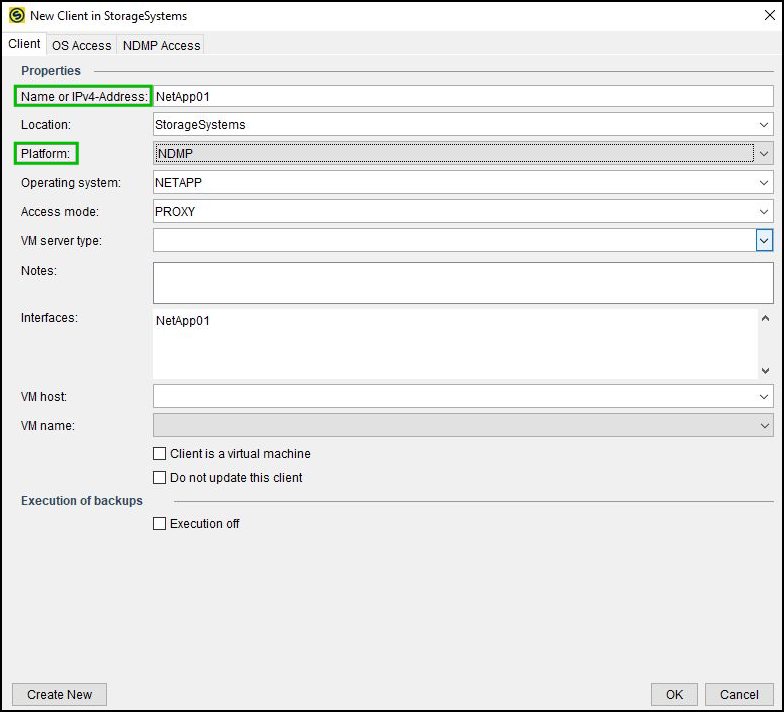 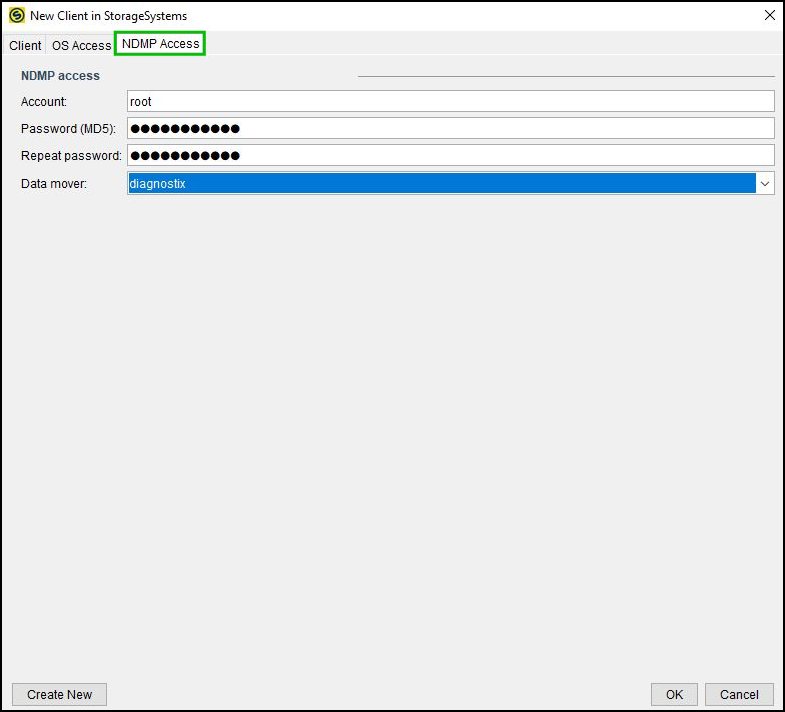 For NAS backup, the SEP sesam Server acts as a backup session master responsible for managing media, scheduling and monitoring NDMP backup and restore. To configure the NDMP backup, you must create a backup task (select the data to be backed up), then set up a backup schedule (specify when you want to back up your data) and link a backup event to it (specify how to back up the data and where to back it up to). For general details on how to configure a backup and its prerequisites, see Standard Backup Procedure. However, configuring an NDMP backup differs slightly from the standard procedure and requires some NDMP-specific steps, which are described below.

Depending on your appliance, you can configure a traditional NDMP dump backup or smtape backup (NetApp specific option). The backup task creation is similar for all NDMP backups, the main difference is that you must define additional arguments for smtape backup in the backup task properties -> tab Options -> Backup options (previously Save options) field.

Direct access recovery (DAR) index is mandatory to restore a directory or a single file from a backup (selective restore). As of version 4.4.3 Grolar, DAR is enabled by default (no configuration is required). 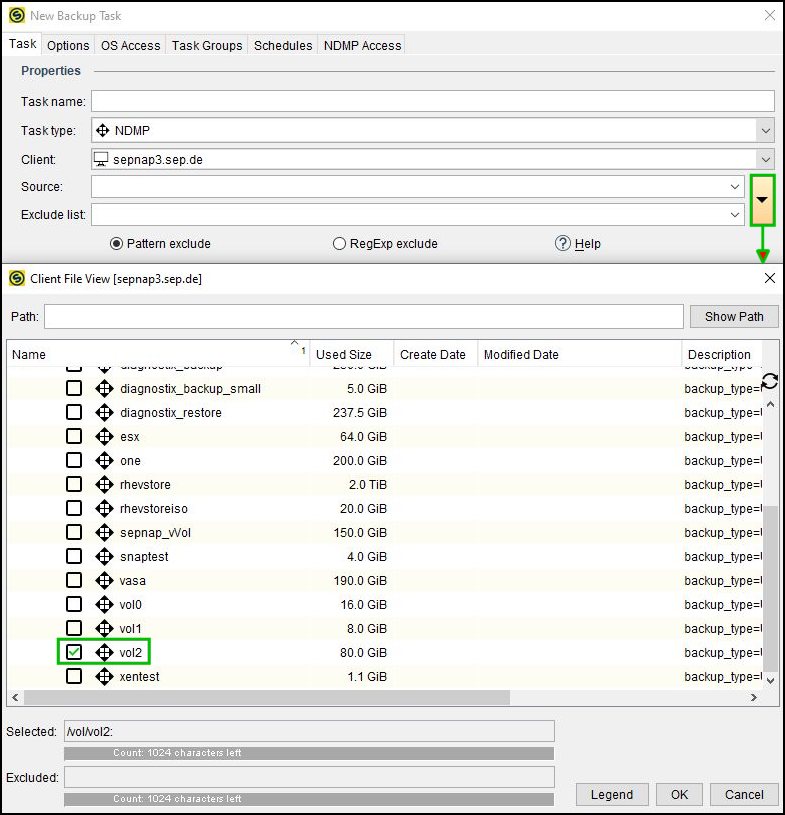 In the Source field, you can manually enter the directory to be backed up for the following NDMP implementations:

EMC VNX
EMC NDMP implementation does not support backing up individual files and folders. You can only exclude files and directories, as described in step 4. 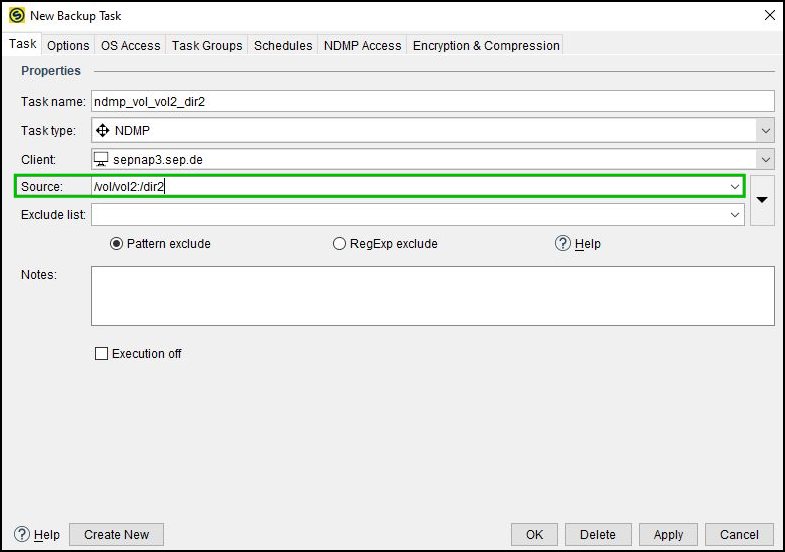 Clustered Data ONTAP (NetApp) and 7-Mode Data ONTAP
Specify the file names or patterns which you do not want to back up with the exact name. You must use integrated common parameter -x to work as exclude list, for example -x /dir1,/dir2. Note that a file or directory name must be preceded with a forward slash "/" and followed by a comma (without space!), if there are more items listed. The exclude list can contain up to 32 names. You can also use an asterisk (*) (a wildcard character) as the first or the last character of the string; each string can have up to two asterisks. For example, to exclude directories smallfiles1, smallfiles2, smallfiles3, smallfiles4 ... or 1data, 2data, 3data:

EMC VNX
You have to specify the following variables to sbc_ndmp: EMC_EDIRxx and EMC_EFILExx (where xx needs to be replaced with increasing number, for example EMC_EDIR01=/cifs_3gb/images, EMC_EDIR02=/cifs_3gb/music etc.). If there is more than one file or directory to exclude, they must be enumerated from number 01; a max of 50 variables can be specified (EMC_EDIR50 and EMC_EFILE50 are the highest possible variables). You can also use the wildcard characters to specify the file or folder patterns. Example: 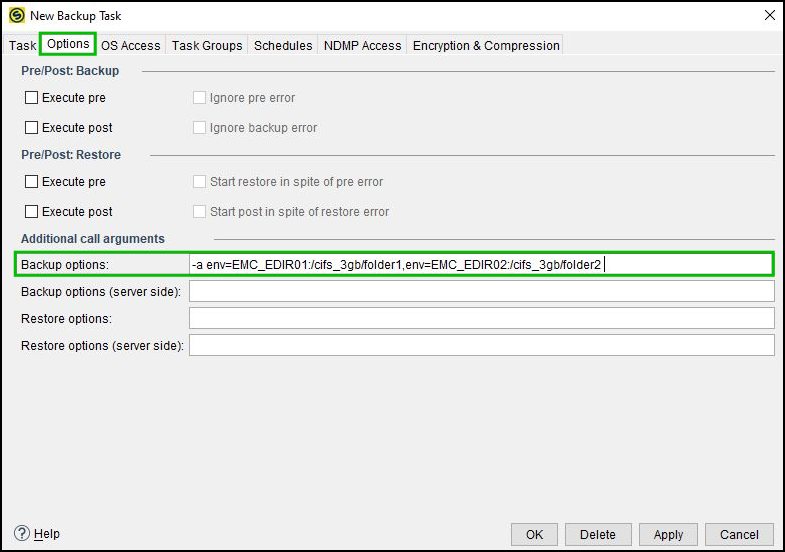 smtape (SnapMirror-To-Tape) is only supported by NetApp. It is an image-based high-performance disaster recovery solution from Data ONTAP that backs up blocks of data of the origin volume. It is deduplication aware and preserves dedup when backing up and restoring data.

You can view the status of your backup jobs by selecting Last Backup State in the Main Selection window. The backup status overview provides detailed information on the last run of backup jobs, including the task name, start and stop time of the last backup, backup level, data size, throughput, assigned media pool, etc.

If you have any problems with NDMP, check the Troubleshooting Guide.